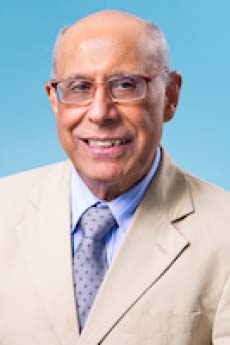 Nozer Darabsha Singpurwalla, 83, passed away on July 22, 2022, at his home in Washington D.C., surrounded by family. He was born in Hubli, India. As a young man, Nozer immigrated to the United States, where he obtained a MS in Engineering from Rutgers University and a PhD in Engineering from New York University under the direction of John Kao. He met Norah Jackson (who had recently immigrated from England) at a dance at Disneyland, and they married in 1969. Nozer and Norah lived most of their married life in Arlington, Virginia, where they raised their two children, Rachel and Darius.

Nozer was a faculty member at The George Washington University (GW) in Washington, DC for over 40 years, serving as Distinguished Research Professor both in the Department of Statistics and the Department of Operations Research (later Engineering Management and Systems Engineering), respectively, and Director of GW’s Institute for Reliability and Risk Analysis; he further held a courtesy appointment with the Department of Decision Sciences at GW. With areas of expertise in diverse fields including reliability theory, risk analysis, Bayesian statistical inference, quality control and statistical aspects of software engineering, he authored/coauthored three books, co-edited six additional references and published over 200 manuscripts. Nozer was a prolific researcher who obtained prestigious grants and contracts with agencies, including the National Science Foundation (NSF), the National Institute for Standards and Technology (NIST), the Office of Naval Research, the Army Research Office and the National Aeronautics and Space Administration (NASA) and held various secondary appointments and consultancies with several laboratories, institutes and companies nationwide. While at GW, he further served as a Visiting Professor at Carnegie Mellon University, Stanford University, the University of California at Berkeley, Florida State University, the Santa Fe Institute and the University of Oxford (UK). Nozer obtained additional prestigious appointments with other institutions internationally. During the fall of 1991, he was the first C. C. Garvin Visiting Endowed Professor in the Mathematical Sciences at the Virginia Polytechnic Institute and State University. In 1993, he was awarded a Rockefeller Foundation Grant as a Scholar in Residence at the Bellagio, Italy Center.

Nozer’s extensive scholarship and research carried over into his teaching and service activities. He had an impressive track record as a PhD advisor to over 40 students where, in some instances, he oversaw multiple students to graduate in the same year. Nozer’s scholarly service to the academy meanwhile included service on a broad array of editorial boards including the Journal of the American Statistical Association, International Statistical Review, Operations Research, Technometrics and The American Statistician. He retired from The George Washington University in 2013 becoming an Emeritus Professor of Statistics and served another eight years as faculty with the City University of Hong Kong. From 2013-2017, he held a joint appointment as Chair Professor in the Department of System Engineering and Engineering Management and the Department of Management Sciences. He then transitioned to other faculty roles in the School of Data Science from 2017-2021; thereafter he was an Honorary Professor in the Department of Management Sciences at City University of Hong Kong.

Nozer was revered internationally for his scholarship, particularly regarding foundational aspects of reliability, risk analysis and Bayesian Statistics. His efforts earned him various distinctions as a Fellow of the Institute of Mathematical Statistics (IMS), the American Statistical Association (ASA) and the American Association for the Advancement of Science (AAAS); and as an Elected Member of the International Statistical Institute (ISI). Along with these accolades, he received several additional honors and awards. He was recognized as the 1984 recipient of the U.S. Army's S. S. Wilks Award for Contributions to Statistical Methodologies in Army Research, Development and Testing; the first recipient of The George Washington University's Oscar and Shoshana Trachtenberg Prize for Faculty Scholarship in 1992; and the ASA/NSF/NIST Senior Research Fellow in 1993. In 2011, he was recognized with the Medal of Excellence award from his alma mater, Rutgers University.

Nozer had a way with words and always enjoyed a spirited debate. His colleagues will most remember his sense of humor and his ability to make the complex appear simple. He loved music (Indian, classical and opera), history and politics and world travel with his family. He is survived by his wife, Norah (née Jackson); his sister, Khorshed Tantra, and her family; his children, Rachel (Peter) and Darius (Jennifer); and his beloved grandchildren, Veronika and Cyrus.